Last night, there was a potluck at my friends Ben and Beverly's house in Santa Clara (theme: sticky foods). Mary, Abigail and I carpooled there, in order to conserve Earth's precious natural resources and discuss critical issues of the day, such as whether or not the song on the radio was by Styx. To get to Santa Clara from Berkeley (by way of Alameda, where I am housesitting) you take 880 south, jog over on 237 and go the rest of the way on surface streets. Normally.
(maps courtesy of Mary)

All this with three people, two sets of directions and one Thomas guide* in the car. Plus one call for directions that resulted in Ben calling Beverly "Helena", eventually forcing me to demand that "Everybody stop yelling at each other and give me directions."
The party was a lot of fun, though, and people ate all of my satay with peanut sauce.

*To be fair, the Thomas guide did not enter play until fairly late in the game.
Posted by Daisy Bateman at 3:50 PM 2 comments

Just Because I Can

At least, I think I can.
Now: Embedding a YouTube video in the blog.

Did it work?
Posted by Daisy Bateman at 2:17 PM 5 comments

My Entry For the American Idol Song Competition

This year, the producers of American Idol have decided to choose the song to be sung by the winner in the finale from a national competition. This is my entry, a song that I think really expresses the true, innermost feelings of the winner at the moment of victory (lyrics only as, sadly, I have the musical ability of a medium-sized trout).


The Heart of Victory

(Intro)
Here I am, standing in the spotlight
Well for once, America got it right

I’m the winner, I knew I would be
By the way, I also act
I’m gonna be bigger than Kelly
Soon as I get out of my contract
And the thousands of hopefuls who came
Are thousands of losers today
So take a good look at your dream
And go back to your job at Tarjay

The finalists I was up against
Had their moments, but not this one
They really thought they had a chance
But they lost and I won
Ooh, losing in this race
May be for your own good
I just know you’ll find a place
Guest-hosting Access Hollywood

(Rap Interlude)
I’ll hug you now, but I think you can see
Second place is just first loser to me
You think you’re a Clay, but you’re just a Justin
Ten minutes from now, you’ll be in the dustbin
The bloggers may whine and your momma may boo
But we all know I won ‘cause I’m better than you

(Chorus)
Sometimes the judges didn’t even like me
But they can just bite me
Go ahead and bite me
BIIIIIIIIIITE MEEEEEEEEEEEEEEEEEE
Posted by Daisy Bateman at 10:07 AM 0 comments

When you are at a fancy restaurant, and you ask the waitress for some water, and she asks you "Still or sparkling?" what do you say to prevent yourself for having to pay eight dollars for a pint of Norwiegan tap water? Do you say sparkling? Do you say still? No! You say tap!
Posted by Daisy Bateman at 11:58 AM 6 comments

The nominees for the 2007 Edgar Awards were announced today and Cornelia (who I will from now on refer to as "my close personal friend, Cornelia Read") is up for best first novel!

Help is On Its Way

Who Are you Calling a Nerd? 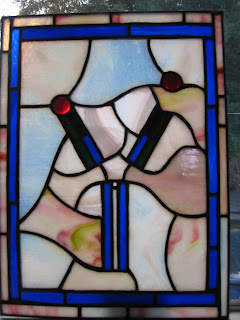 What? What?
Posted by Daisy Bateman at 8:53 PM 0 comments

. . . As a bad example. Really, were you expecting anything else?
Brilliant bestselling author Tess Gerritsen based a recent blog post on a recent comment of mine on why I can't manage to write stories in a scientific setting, because I get too caught up in the details and trying to get everything right. She makes some excellent points about information vs. characterization and what really makes a story go, so hey, glad I could help.
Posted by Daisy Bateman at 8:29 PM 4 comments

No, web! Thanks to the fine folks at Blogger, now even an html-incompetent person like me can add links to her blog, so I have. Enjoy.
Posted by Daisy Bateman at 1:29 PM 0 comments

The funny thing is, their last win seems to have happened when I was a sophomore, and yet I remember nothing of this momentous occasion. (Ben? David? Help me out here; was there a party and I just wasn't invited?) I do remember that CNN did a story on the team-- something about them having the worst record and the best SAT scores-- and that some of the players were annoyed because they had to dress up in lab coats and stand around in a chemistry lab when they were mostly engineers.

(Thanks to Karen for the heads-up.)
Posted by Daisy Bateman at 3:53 PM 0 comments

The world's tallest man, Bao Xishun, was called in to save two dolphins that had swallowed plastic shards at an aquarium in Fushun, northeast China. After surgical instruments failed to remove the sharp slivers, Bao used one of his 1.06-metre arms to reach in and extract the chunks from the dolphins' stomachs.

As scintillating as this account is, it leaves out a few key details, which I have supplied below by making them up:

(Scene: It is early afternoon and the World's Tallest Man is relaxing in his Fortress of Height when he notices a light shining on the clouds (it's a cloudy day).)

He leaps up (and up, and up) and grabs the phone.

World's Tallest Man: Hello, Commissioner?. . . I see; that sounds serious. . . . You want me to stick my arm where? . . . No, I understand, I'll be right there. (To his trusty companion, the World's Second Oldest Cappibera) To the Tallmobile!

EXT. FUSHUN AQUARIUM-- DAY: The World's Tallest Man arrives and is greeted by the Commissioner of Dolphins.

He steps out of the Tallmobile, up the steps and through the door.

INT. FUSHUN AQUARIUM-- DAY: Two sick dolphins are lying on a table. A crowd of worried doctors and spectators is gathered around.

World's Tallest Man: (shaking out his arms) Be calm, my finned friends. I'm here to help.

Short Spectator: I don't understand tall people, and I don't trust them. I think they should all be locked up. How do we know they aren't going to turn on us one day and crush us with their giant feet?

Another Spectator: He sure is tall, isn't he?

Yet Another Spectator: My cousin is pretty tall, you know. He's at least, like six-three.

Previous Spectator, Not The Short One: I think this guy's taller than that.

The World's Tallest Man sticks his arms into the dolphins' mouths, all the way up to the shoulder, roots around for a minute and pulls out two handfuls of sharp plastic shards.

Spectators (Except The Short One): Yay!

Commissioner of Dolphins: Thank you so much! How can we ever repay you?

He leaps into the Tallmobile and drives away, avoiding low overpasses and overhanging trees.

New Spectator: Who was that tall man?

Spectator From Before: That was Bao Xishun, the World's Tallest Man. Where the hell have you been?

*For the purposes of this story, everyone in China speaks English.
Posted by Daisy Bateman at 5:04 PM 4 comments