Last night I went to see "Live Free Or Die Hard", possibly the best movie ever to be adapted from the New Hampshire state motto. A refreshingly retro movie-going experience, entirely free of people flying through the air, or morphing into something else, or having long conversations with characters who weren't added until post-production. There were, however, one liners, and explosions, and one liners that came directly after explosions. ("You just killed a helicopter with a car!" "I was out of bullets.") There was also pizza and refreshing adult beverages, because we saw it at the Cerrito, a second-run theater where such things are served. I like it there; it's cheap and there's a relaxed kind of atmosphere where you can get away with the occasional sotto voce commentary. (Me: "Since when do servers have CD drives?" Mary: ""That's where you lose your suspension of disbelief?")
In short, if you are in the market for a big dumb movie to go boom at you, you could do worse.
Posted by Daisy Bateman at 9:53 PM 1 comments

Email ThisBlogThis!Share to TwitterShare to FacebookShare to Pinterest
Labels: movies

Situation: Your friend has just told you that she is engaged.

(Potential, even worse responses:
"So, when's the baby due?"
"Is he mental or something?"
"That's what you think.")
Posted by Daisy Bateman at 11:52 PM 0 comments

Please be advised that, should you be employed as a summer intern at a biotech company, and should you decide that, as you are in possession of a pleasant singing voice, you would like to spend your days wandering about the lab singing (quote) "lalaladeladela" (or, alternatively, "dadadanananaah"), the people around you are not thinking "My, what a lovely voice. Aren't we lucky we have someone that talented here to sing for us?" They are, in fact, thinking "Dammit, shut up before I do something with this graduated cylinder that we're both going to regret."

Thank you; that is all.
Posted by Daisy Bateman at 5:28 PM 0 comments

Email ThisBlogThis!Share to TwitterShare to FacebookShare to Pinterest
Labels: science

Sometime around four this morning I woke up.
"Bad dream," I thought.
"Rumblerumblerumble," went a sound in the distance.
"Earthquake?" I thought.
"WHUMP," went the Earth.
"Yep. Earthquake."
And then I went back to sleep.
Posted by Daisy Bateman at 8:36 PM 0 comments

"We can categorically state that we have not released man-eating badgers into the area."

The Politics of Walking

Right, so here's my question: You know how when you go out for a walk around the office park, because it's a nice day and you could use the exercise, wearing the sneakers you keep under the desk (because you have become the kind of person who keeps sneakers under her desk, even though you still aren't sure how you feel about that) and your pantlegs rolled up because they're only the right length if you're wearing heels, and sometimes there is a person in front of you, walking just slightly slower than you are? So you end up kind of creeping up behind this person, fast enough that the gain is noticeable, but not so fast that you can just breeze on by. And then, when they sense you coming up behind them (by hearing or peripheral vision or ESP or whatever) they speed up just a little, so you're stuck walking uncomfortably close to a total stranger in a virtual lock-step, each of you totally pretending that the other one isn't there. So what do you do? Suddenly develop a need to tie your shoe, then walk unnaturally slowly the rest of the way? Jog for fifty feet and act like that is what you were going to do anyway? Just turn around and go back? Or put on a burst of speed like you just smelled something bad, ducking your head in a kind of "excuse me, sorry, coming through" apology without actually acknowledging the other walker's existence?

Personally, I tend to go with option D, but I'm open to suggestions.
Posted by Daisy Bateman at 6:56 PM 6 comments

Recently, I went to see Ratatouille (excellent movie, by the way) and, of course, there were plenty of trailers to watch before the feature.

This one made me very happy:

I think I'm already in love with that robot.


And then there was this one, which made me question my sanity:

Because, to me, making a feature film based on a crappy cartoon from the sixties, and doing it live action, with an actual dog that flys, talks with that creepy moving-lip CGI thing and screams like Macaulay Culkin circa Home Alone sounds like a bad idea. But clearly a number of highly-paid movie executives, professionals at the height of their careers disagreed, and decided to spend more money than I am likely to see in my lifetime to make this idea a reality. So I have to wonder: Does their knowledge and experience mean nothing? Or could it be that they are right and, all appearances to the contrary, this is actually a good idea; that everything I thought I knew about reality is nothing but a sad and broken dream?

You see my problem.
Posted by Daisy Bateman at 11:38 AM 0 comments

I was reading the news roundup in Nature today when I came across this little item, and I just had to share.

From the latest issue of Cellular Microbiology:

Scientists may have identified a step in the evolutionary path that produced the bubonic plague.

Bubonic plague is caused by the bacterium Yersinia pestis, which is transmitted to humans by rat fleas. B. Joseph Hinnebusch of Rocky Mountain Laboratories in Hamilton, Montana, and his colleagues report that a related bacterium, Yersinia pseudotuberculosis, is toxic to fleas, causing diarrhoea.

They think this toxicity is due to a protein that acts in the flea gut. The researchers ruled out Tc toxins, a class of bacterial toxins with known insecticidal activity, as being to blame, leaving the identity of the protein unknown.

The group suggests that modification of the toxic protein may have enhanced flea-borne transmission and played a part in the genetic divergence of the two bacteria.


Clearly, this raises a couple of serious questions: 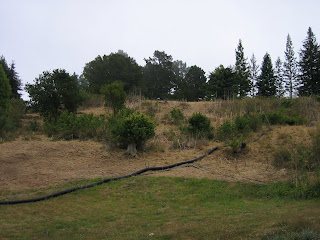 They came. They ate. They pooped.
Posted by Daisy Bateman at 6:41 PM 2 comments

Email ThisBlogThis!Share to TwitterShare to FacebookShare to Pinterest
Labels: photos

And Now, For No Particular Reason. . .

A vaudeville animal routine! Well, why not?

This is my backyard. These are about 300 goats. They are (almost) in the backyard because next door is Tilden Park, a very large and, in the summer, very flammable open space. 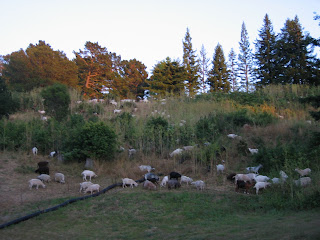 It's worth noting that this picture was taken less than an hour after they arrived. There used to be some grass on that hillside.
Posted by Daisy Bateman at 8:54 PM 1 comments

A Bicycle Built for Neptune

In what is being described as a "major blow" to feminist t-shirt makers everywhere, pescatorial behaviorists at the University of Toomuchtimeontheirhands, New Mexico, have determined that fish do, in fact, require bicycles.

"To be honest, we're all a little surprised by these results," said Dr. Phil Landers, the principle investigator on the project. "The idea that legless animals that spend their entire existence under water might have such a strong affinity for such a clearly terrestrial machine seems counterintuitive, but that's the beauty of science. You just never know what you're going to learn."

He admitted to being unclear on how exactly the project was initiated, but denied early reports that it had anything to do with graduate student Diana Hartman's recent breakup with her longtime boyfriend and the lab's subsequent bar crawl to "help her get over that jerk".

In their experiments, the researchers observed the behavior patterns of two representative groups of fish, half of which were allowed unlimited access to bicycles while the others were not. They observed that the bicycle-positive fish appeared to be living happy and fullfilling lives, while those deprived of the two-wheeled conveyances became moody and irritable and were inclined to collect figurines.

What the fish actually do with the bicycles remains unknown.
"Obviously, these data raise almost as many questions as they answer," said Postdoctoral Fellow Roy Dreyfuss. "I think we're gonna need a bigger grant."

The wider implications of these results remain to be investigated, although law enforcement agencies have expressed interest in their possible relationship to the ususually high rate of bicycle thefts in towns along the Easter seaboard. Representatives of the Shwinn corporation refused to comment on reports of what is described as a "standing order" for an annual delivery of five thousand ten-speeds to the Santa Monica pier.

For their part, longtime advocates of the fish-bicycle anti-relationship claim to be undisturbed by the findings.
"While we welcome and encourage all forms of scientific inquiry," said a Metaphor Research Center spokesperson, "these people are clearly full of what a bear does in the woods."
Posted by Daisy Bateman at 1:58 PM 0 comments

Well, What Else Are You Going To Do With a BA in Classics?

Some young people, when they graduate from college, take some time off to find themselves, and maybe bang out a Great American Novel. Some get a job and a sublet and real clothes, and some go to grad school. And some go off sailing to Africa on a reproduction of a nineteenth-century slave ship. That last group? That would include my cousin Ella.
Posted by Daisy Bateman at 2:40 PM 0 comments

There are some mornings when you wake up, the sun is shining, the birds are singing and you've had a good night's sleep and are ready to face whatever delights the day may bring. Then there are mornings when you stumble out of bed at six-thirty to let out the dogs and put out the trash and then, upon returning on the hope you might get a few more minutes of sleep, discover you have locked yourself out of the house, and it is going to take an hour and a half and a hundred-dollar call to the locksmith to get you back in. Guess what kind of morning I'm having?
Posted by Daisy Bateman at 10:06 AM 0 comments