The big difference between my upcoming trip and my last one, aside from the fact that I will be a coddled cruise ship passenger traveling through Alaska rather than a muddled driver wandering through the southern United States, is that I won't be traveling alone. Megan and I have known each other since high school and we've traveled together once before, to Ireland two years ago. So I know that we can go for extended periods without getting on each other's nerves and neither of us snores, which is what you want in a traveling companion. Our only source of tension was driving- always problematic in places where people use the wrong side of the road. I ended up doing most of it, which was apparently a bit stressful. You see, though a northern Californian to the core, I had my formative driving experience in LA, which means that I take to the road with the firm beliefs that: 1) 'speed limits' are really more like suggested minimums and 2) I have the right-of-way. (I would like to point out that I have never been involved in a major accident.) But anyway, the opportunities for driving while on the cruise should be pretty limited, so I expect we'll do fine.
(On a related note, I want to offer the advice that, while two people can do great on a trip, and four or five can be a blast, you should avoid at all costs traveling in a group of three. Just trust me on this one.)
Posted by Daisy Bateman at 10:14 PM 0 comments

End of the Road 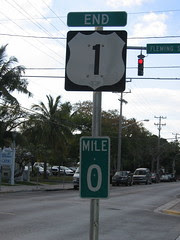 IMG_0130
Originally uploaded by Daisyj.
Well, I made it to Florida about two months ago, and my pictures have finally caught up.

Next up: Alaska.
Posted by Daisy Bateman at 1:21 PM 0 comments

My story was just posted at Escape Pod. I'm pretty excited about this.

I sold a story! For actual money! I'm so proud of me.
Posted by Daisy Bateman at 11:55 PM 3 comments

And probably the last one for a while, since my immediate plans call for finding gainful employment. Next month, Megan (you know Megan, right?) and I are going on a cruise to Alaska, where we hope to see whales and, probably, begin to resemble them (I will, anyway; I don't think Megan has gained so much as a pound in the last ten years. Not that I'm jealous or anything). It should be a lot of fun, if significantly less adventuresome than my last travel experience. Which is just fine with me. The way I see it, sometimes you want to drive solo across the country, watching out for roadkill and wondering if you could find yourself on a map, and sometimes you want to sit in a lounge chair on a giant floating hotel, viewing fully three-dimensional wildlife from a safe distance and occasionally staggering through a buffet line. It's all about finding your moment.

After a long delay...

Posting again! This time it's pictures of New Orleans.
Posted by Daisy Bateman at 12:29 AM 0 comments