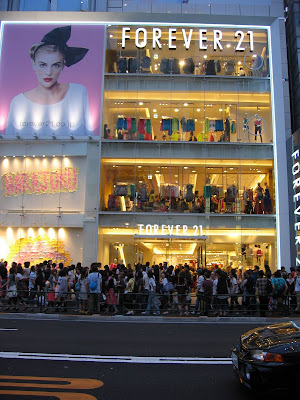 Can you find these things in this picture?

1. A sign made out of post-it notes.
2. A policeman wondering how his life and career have come to this.
3. Two bored children.
4. The men's floor.
5. Indirect evidence of Gwen Stefani's popularity in Japan.
6. More money than you make in a year being spent on trendy, largely synthetic, clothing.
7. Anything that even begins to make sense.
Posted by Daisy Bateman at 11:15 PM 0 comments

Eventually, I May Even Make It To Day 2

Did you think I had forgotten about Japan? Perhaps given up, due to my clear total lameness? No! Well, sort of. The thing is, travel blogging takes time and, well, I’m lame. Also, it’s not like anyone is paying me for this.

But that doesn’t mean I’m giving up; I’m just going to try something different. Instead of powering right through the trip and trying to get it written up in a reasonable timeframe (already not an option), I’d pretend I was doing this intentionally, with occasional posts stretched out over the rest of the summer. Think of it like a book you read a bit of, then put down and forget for a while, then pick it up again and read a couple pages, and then something in the kitchen starts smoking and you have to run around opening windows and turning off the smoke detector, and you don’t get back to it for a few days. The blog’s going to be kind of like that.

Speaking of which, you know what would be a great place to read this? In a café that provides you with dogs for company: 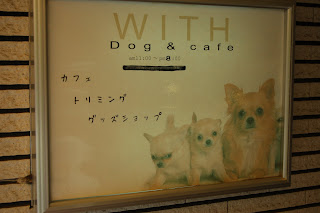 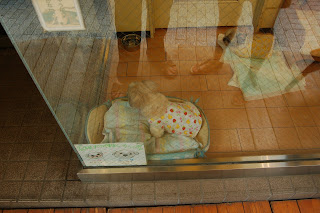 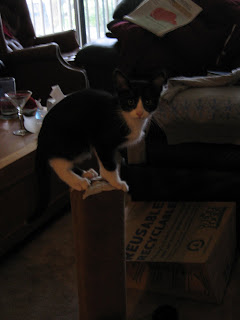 "The FBI made dozens of arrests in New Jersey, including the mayors of Hoboken and Secaucus, in a probe involving corruption, money laundering and the trafficking of body parts."

Body parts?
Posted by Daisy Bateman at 10:21 AM 0 comments

And Now: A Folk Art Market

Well, my goal of finishing blogging the Japan trip before I left for Santa Fe didn't exactly pan out. To be entirely precise, I haven't exactly finished the first day. (Don't worry, I took notes.) (On second though, worry.)

I'll get back to that, but first I want to tell you about Santa Fe. I was there with Mom, to volunteer at the Santa Fe International Folk Art Market, with which Mom's cousin Melanie is heavily involved (so, incidentally, is Ali McGraw).

We arrived to a thunderstorm and a large number of people who I seemed to be related to, plus a few it turned out I wasn't, at a party at Cousin Melanie's. Both the lightning and the salad were quite impressive. Also, I should have gotten a hint about the rest of the weekend when, ten minutes after a torrential downpour, the patio was completely dry. But more on that later.


I have to admit, I really didn't have much idea of what to expect for the volunteering part. In my mind, Mom and I would linger in the Turkmenistan tent, sipping endless cups of tea and selling the occasional rug. Turns out the tent part was right.

In fact, there were several giant tents, which were divided up into booths for the various artists (all hundred and twenty-five of them), with each artist getting about ten square feet to display and sell their wares. Tavus, the lady in the Turkmenistan booth was very nice, but as her English was limited to saying "Price" and holding up the appropriate fingers and my Russian/Tukmen is limited to "none," there wasn't much of an international exchange of ideas going on.

Not that there would have been much time for it. What I thought was going to be a day of casual browsing turned out to be a vicious shopping free-for-all, starting with the shocking number of people who had paid the fifty dollars to get in at seven-thirty, an hour and a half before the fair opened to the general public (as defined as "people who are only willing to pay fifteen dollars to get in, or ten if they bought in advance").

The rugs were selling briskly, much more so than I had expected, but it was nothing like the scene at the next booth over, where two women from Georgia were selling a variety of textile goods. Their stock, being smaller and more impulse-buyable, was being snapped up like, I don't know, snaps or something. And the one volunteer they had helping them was completely overwhelmed, so I was drafted into service to help her (I was also temporarily transferred to Uzbekistan). I actually ended up working the Georgia booth both days-- on Sunday no one showed up for them at all, and I was the overwhelmed solo helper, who needed to find someone to cover for me if I had to go to the bathroom, or eat or something.

My job, as an "artist's assistant" was largely in sales. The market had this whole complicated system, involving forms in triplicate, bags, staples, payment tents, more forms, ID codes and, if you were lucky, sorting.

And all of this was happening in temperatures that were record for Santa Fe in the summer, which is to say, very hot. We were well into the tent, which was itself shaded by a tree, but a few steps into the sun left you feeling scalded, and the air was so dry you never even felt yourself sweat.

The porta-potties, needless to say, were terrifying.*

But, temperatures and paperwork aside, it really was kind of fun. There's nothing like the feeling of power you get from having a bunch of people lined up in front of you, needing your assistance. (There are things that are better, but nothing exactly the same.) The energy in the place was terrific, like they air was saturated with some kind of pheromone that acted directly on the brain with the simple signal of "Buy! Now! More!"**

And there was the cause, of course, which was a good one. The women in my booth represented an organization of textile makers from Georgia, a place I was largely aware of for not being the state and having a unfortunate recent tendency for drawing a large number of Russian troops. Their purpose, as best as I could understand it, was to seek out practitioners of traditional crafts, which had suffered rather badly in the Soviet era, along with, probably, pretty much everyone else, and help them try to make a living off their work. The two women who were working the booth were among the founders of the group, and as I got to know them better it was embarrassing to see the way the customers patronized them, treating these cosmopolitan businesswomen like particularly bright children.

For my part, I was convinced they found me intensely annoying and tried to stay out of their way, but that may have had more to do with cultural differences/the fact that I assume that about everyone, since on the second day one of them gave me a lovely embroidered bracelet, and they both said nice things about me to my mom.


Some of the breaks I took from selling, I spent sampling the local New Mexican cuisine. I already knew I liked Navajo fry bread with honey, but I had heard of, but not yet tried Frito pie. So I did.

Let's just say, if that dish is not somewhere in the archives of this website, it really should be. Plus: tasty!


So that was Santa Fe: heat, family, sales, calories. Hope you had a good weekend too.


*Fortunately, as workers, we were allowed to use the real bathrooms at the museum; otherwise I'm not sure my spirit of volunteerism would have lasted out the first day.
**My high native levels seem to have made me largely resistant, though I did end up with two pairs of earrings and some fingerless knit gloves***, my latest weapon in the battle against Corpse Hands.
***Which may seem like a lot, but come on. Me? In a giant market full of goods for sale? That's basically negligible shopping. Within the error bars, at least.
Posted by Daisy Bateman at 3:05 PM 1 comments

The Cutest Squid You Will See Today 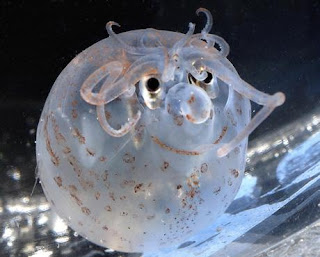 (via @weirdimals)
Posted by Daisy Bateman at 8:17 AM 0 comments 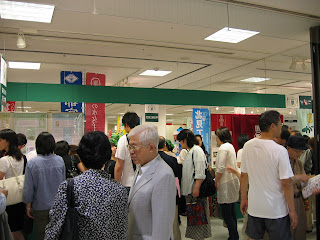 We ended up eating two of our meals in Tokyo in department stores. Which isn't nearly as odd or as sad as it sounds; the department stores there are little worlds unto themselves, and very elegant ones at that, complete with a selection of fine and casual dining restaurants on their upper floors, and elaborate food courts/markets in the basements. We had intended to go to one of the latter, but they turned out to be take-away only, which isn't very convenient for visitors in a city with little in the way of public spaces. So we ended up at one of the top-floor restaurants, where we had soba (which comes with a pot of the water they cook the noodles in, for you to mix with the sauce when you're done and make a soup), and tempura of the sort that I searched all of San Mateo for and never found. (Sorry, San Mateo; Japan wins.)

On the way back down, we decided to take the escalators, to see a bit more of the store. It went something like this: women's clothing. . . men's clothing. . . scarves and accessories. . . giant crowd of people mobbing around a bunch of booths with signs we couldn't read. . .

We got off at that floor.

It took a while, but eventually we figured out what was going on. It was a market where the students from various universities were selling the wares they produced in their schools. Which seemed to be largely sake and sochu, proving that, no matter where you go, the basic nature of college students remains constant.

So we fought our way through the teeming mass of people who were teeming, massively, and made a couple of purchases. First, a couple of ice cream treats, in ginger and spinach*. (They told us we had an hour to eat them, which seemed optimistic, until we discovered they have been packed with a chunk of dry ice. Fun for the whole family!) Then, after a break in front of a sochu booth where a somewhat tipsy local wanted to learn about our travel plans, be assured we were having a good time, and exchange business cards (with Cameron; I hadn't brought any), we found a booth that was selling, of all things, Japanese wine. Which was not particularly good, but it was hardly bad, and so unusual that we had to get a bottle.

There was lots more to see, but the claustrophobia was starting to set in, plus we were worried about the ice cream, so we decided to let the rest of the fair remain a mystery, so we went to the store's rooftop garden** to have our treats. I had the ginger.

*The young women who were doing the selling couldn't think of the English for spinach, and attempted to convey the flavor by repeating a word that we eventually figured out was "Popeye."
**Of course it had a rooftop garden.
Posted by Daisy Bateman at 4:26 PM 0 comments

Sad story, but a good song. Are those hats from Chevy's?