Oh sure, the so-called authorities will claim it was dropped by a bird, but I think we all know the truth: At this moment, thousands of vicious, many-toothed man-eaters are preparing themselves for an aerial assault on our nations golfers, and there is a very real chance that we may not be there to watch.

Is there nothing left to believe in?

The bad news: A statue of Buddha, alleged to have carved out of a meteorite in the 11th century and looted from Tibet by a Nazi expedition in the thirties is a 20th century counterfeit, was probably never looted by anyone.

The good news: The meteorite part is true.

The movie pitch: It's "The Maltese Falcon" meets "Alien."

Chain Linking: The Next Big Thing

The following post comes to you thanks to the brilliant and fascinating author Camille Minichino who has generously invited me to join her in the following blog chain. The way this works: Each person gets the same ten questions about their next (or, in certain cases, theoretical first) book, which they must answer to the best of their abilities. At the end of the post you link to all the other posts and everybody is happy. Here is Camille's post to get you started.

Ten Interview Questions for the Next Big Thing:

What is your working title of your book?
Land Squid.

Where did the idea come from for the book?
While drinking at a friend's bachelorette party in New York, conflating the premises of two SciFi Channel movies (giant squid lives in lake, eats people, is defeated by James Van Der Beek vs. Loch Ness monster travels through underground channels to North America, eats people, is not defeated by James Van Der Beek).

What genre does your book fall under?
Home improvement. Or horror-comedy. Kind of depends who you ask.

Which actors would you choose to play your characters in a movie rendition?
Sigourney Weaver for the put-upon small town police chief-turned-squid-killer, Amy Adams for the scientist who knows nothing about squid, James Van Der Beek.

What is the one-sentence synopsis of your book?
Non-stop squid-on-land action.

Will your book be self-published or represented by an agency?
I hope to find an agent for it when it is finished. Failing that, I plan to hand people the manuscript and stare at them awkwardly until they read it.

How long did it take you to write the first draft of your manuscript?
About two years, I think. Sadly, that is the fastest I have written anything so far, and it shows.

What other books would you compare this story to within your genre?
The thriller aspect draws on the style of books like "Jaws" and "Jurassic Park" and their many imitators, and for the humor side I am heavily inspired by the works of Terry Pratchett, though I have no intention of comparing myself to him, because he is much better at it.

Who or what inspired you to write this book?
I love terrible, over-the-top monster movies, so I set out to write a book that had all of their best elements, without the downside of having to watch Coolio trying to act. I also had a very strong desire to write a scene in which a person using a leaf blower early on a Saturday morning is brutally killed.

What else about your book might pique the reader’s interest?
Aside from the giant, killer, land-based squid? Well, there are several scenes where people have lunch.


~~~~~~~~
Not quite what you were in the mood for? Well, here are four other writers who might have something more up your alley:

A Sudden Descent Into Crass Commercialism

If you live in the Bay Area (and frankly, why wouldn't you?), you've probably seen plenty of people wearing "The City" and "The Town" t-shirts, celebrating the nicknames of San Francisco and Oakland, respectively. I've always thought they're great, but just a little limiting. Which is why, with the help of a contract design company and the custom product e-retailer that's based in my same office park, we are proud to introduce the first products in the Half the Fun retail empire*:

The Burbs Shirt by halfthefun

The Burbs Shirt by halfthefun 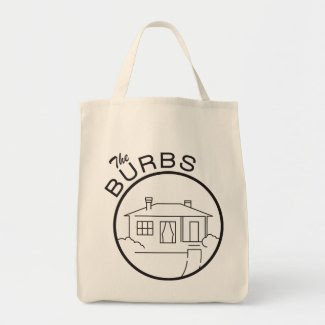 For organic heritage eggplant from the farmers' market! 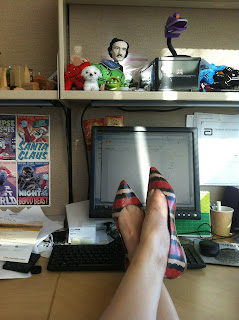 Having been started off with a pair of completely awesome poisonous-snake-print flats from my equally awesome husband, I have a feeling that the second half of my thirties is going to go just fine.

Service Has Been Called 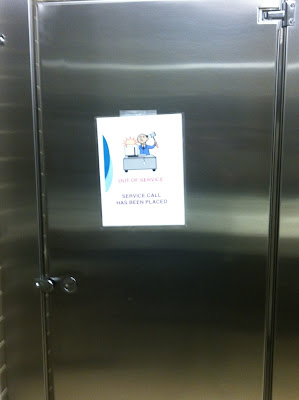 But what exactly do they think we do in the office bathroom stalls?
Posted by Daisy Bateman at 5:12 PM 0 comments

We now interrupt your normal lack of programming to bring you exciting developments in the ongoing saga of the Great Maple Syrup heist: Canadian police report that they have potentially tracked some of the contraband to a syrup dealer in New Brunswick. The suspect sap has been confiscated for further study and it's source is being traced. Meanwhile, the retailer in question continues to assert his innocence, claiming that he is the victim of a smear campaign by the Quebec syrup cartel, with whom he has clashed in the past.

Moneyball 2: The Rise of the Rookies 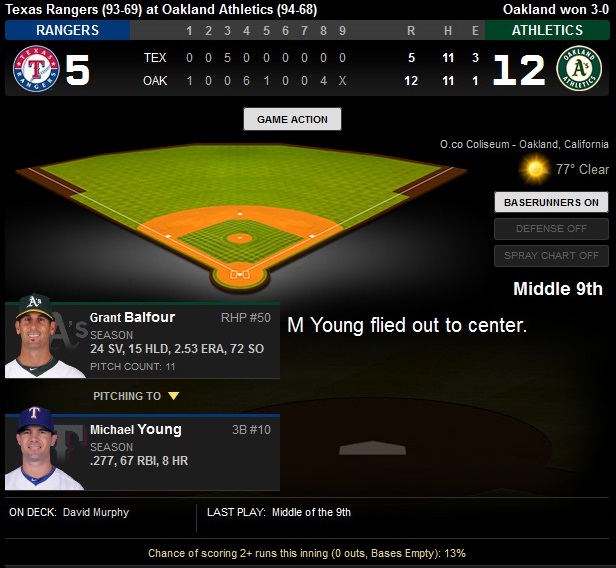