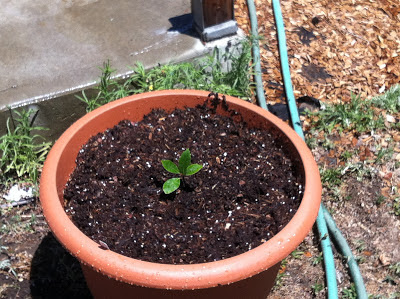 Plan for success.
Posted by Daisy Bateman at 1:09 PM 0 comments

Email ThisBlogThis!Share to TwitterShare to FacebookShare to Pinterest
Labels: gardening

Gardening Accessories of the Rich and Stupid

Do you want the satisfaction of tending your own garden plot, but are afraid you might not be able to spend sufficiently ridiculous amounts of money and/or look stupid enough while doing it? Well, fear not! Capitalism has you covered.

For starters, you're going to need some tools.

You provide the sticks. (Seriously.) The primary downside of purchasing this set is that, if you do, a farmer from the 1860s will appear on your doorstep and punch you in the face.

Or, if that seems like too much of a commitment, you could always start by just buying a shovel:
Solid copper, so your plants won't get arthritis.

And what if you like the look of old garden tools but would rather sit on them than use them?

Or maybe you have moved to a "transitional" neighborhood that is still in the part of the transition where people pile industrial scrap in their yards, and you want to fit in, but not too much:
Steampunt.

Once you've settled in, you'll want to invite some friends over, maybe play some bocce:
You'll need a tub for drinks:
Somewhere for people to sit:
And some sort of pointless little garden cupboard:
There ain't no party like a pointless little cupboard party.


But really, when you come down to it, the garden is your space, to grow flowers and food and maybe even raise some chickens in a ludicrously expensive coop that looks like the abandoned craft project of a drunk four-year-old:
(You know you're doing something wrong when you're making Williams-Sonoma's offerings look sane and reasonable by comparison.)
Posted by Daisy Bateman at 2:24 PM 3 comments