Join me, won't you, as we descend into the depths of the expensive and hideous. No snorkle required!*

"What do you mean the bottom of the coat got caught in the shredder, and the only material we have on hand is a bath mat? We're a high-end design house! We can't. . . Oh, to hell with it, just staple them together and meet me at the bar."

I've been staying away from jumpsuits and rompers because they're so intrinsically stupid that there's nothing that interesting about a stupid-looking one.

So I'll say this for our psuedo-military, crotch-bag friend here: It's managed to take stupid-looking to a whole new level.


Speaking of which. . . I wonder, is there a subset of wealthy people who intentionally make themselves look as unappealing as possible, in order to determine who is just attracted to them for their money?

It's like someone went to clown college and majored in crocheting.

And to think your dad complained about the tacky short you gave him for Father's Day.

Another thing I've resisted so far is the impulse to post very, very short dresses with a "that's not a dress, that's a shirt" label, because it just makes me seem old and crotchety. But this? This is not a dress. This is a shirt.

There won't be much going on here for the next week or so, except for one Ugly Clothes for Rich People post that I am going to write now and set to go up at some random time, because I am going to be in Vegas, testing the effects of heatstroke on a hangover. It should be warmish: 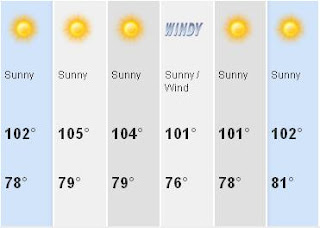 So I guess I'll just have to find myself somewhere air-conditioned.
Posted by Daisy Bateman at 4:44 PM 1 comments

My Project For The Day 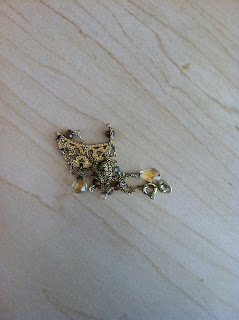 Should keep me busy for a while. 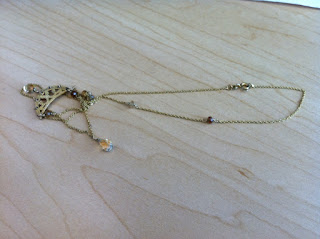 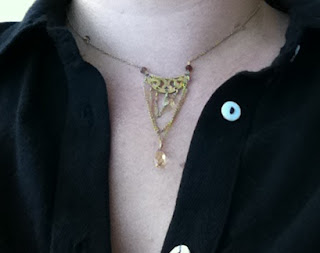 Posted by Daisy Bateman at 9:31 AM 0 comments

While I prepare another round of sartorial horrors for your viewing pleasure, let's all look at this and remind ourselves that yes, there still are beautiful things in the world:

There. I feel better already.
Posted by Daisy Bateman at 1:32 PM 1 comments

Email ThisBlogThis!Share to TwitterShare to FacebookShare to Pinterest
Labels: shoes

Seriously, I can keep doing this forever.

The Mummy Returns And Opens A Boutique In South Beach


Young lady, you take off your Aunt Sybil's valance right now and apologize to her. That's no way to be handling a fine window treatment.


All of the classic elegance of a trench coat, now with 80% less sides!


For that insouciant "nightmare where you're naked at a picnic and have to wrap yourself in the tablecloth" look that is all the rage these days.


Not to get too personal, but I know an excellent waxer.
Posted by Daisy Bateman at 7:48 PM 5 comments

Shoesday: I Know Why the Caged Foot Sings 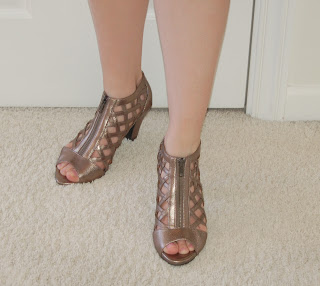 Or, Summertime, And The Walking Is Sweaty

Sometimes, you have to compromise. Sure, you might want to move into a treehouse, live on Pixi Sticks and sleep until four every day, but since your employer, dentist and reality won't accept that you settle for surreptitiously picking your nose during meetings. It's the same for me with shoes. As much as I love my collection of fabulous Heels of Insanity, there are times, such as when I am planning to walk for more than five minutes at a time, when discretion becomes the better part of not staggering barefoot through the second half of the evening. But since, to paraphrase the poet Young MC, I don't want to hang myself with the orthopedic rope, a compromise must be reached.

That's where these come in. They're Sofft which, as previously discussed, has some lovely items among the lumps of concrete. They're comfortable while still being flashy, which makes them perfect for next week's trip to Vegas, a place where you can go out in a leather skirt, pink bustier and six-inch lime green platforms and come across as, essentially, Mother Superior, but also a place where walking is your most viable transportation option, since the traffic doesn't move and the public transit doesn't go anywhere.

Compromise: Sometimes it's shiny.
Posted by Daisy Bateman at 11:53 AM 1 comments 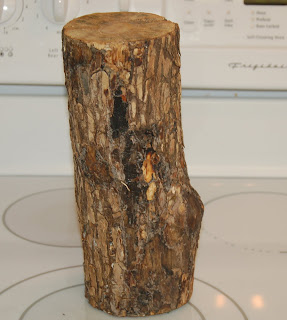 You can't say I didn't try. I gave it two rounds of soaking in the recommended dechlorinated ice water, a paper bag over it to keep it damp and its very own plate to stand on and hardly bothered it at all, no matter how much I wanted to know if it was working. But, after that one surprise initial bloom, my mushroom log has been resolutely unproductive, and I think it may be time to throw in the towel.

Or log. Whatever.
Posted by Daisy Bateman at 9:39 AM 3 comments

Email ThisBlogThis!Share to TwitterShare to FacebookShare to Pinterest
Labels: gardening


Police departments nationwide have been put on high alert for produce trucks entering population centers and gardeners are encouraged to register existing melon patches with Homeland Security. Should you happen to see any unattended fruit, do not approach it; retreat to a safe distance and contact the authorities immediately.


*Some aspects of this headline have been exaggerated for dramatic purposes.
**Link courtesy of Aftertime.
Posted by Daisy Bateman at 1:53 PM 0 comments

We now continue our ongoing series of "Things You Couldn't Afford, And That's Okay":

Are you an old man? Were you already an old man in 1987? Are you, currently, playing golf? Well, you still shouldn't be wearing these.

She is going to hunt down the people who stole the rest of her shirt, and kill them.

"Are you ready yet?" "Just another twenty minutes, I'm buckling my jacket."


If you click through on the links here, you may notice that many of these items are already on sale. That's not surprising. What is surprising is how many sizes are already sold out. I bet the people who paid eleven hundred dollars for these pants feel pretty stupid right now. Fortunately, they look stupid too, so it works.
Posted by Daisy Bateman at 4:42 PM 2 comments 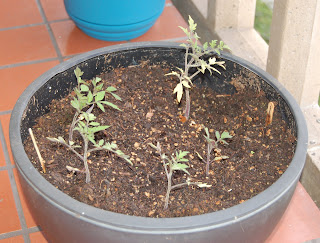 It's been a rough spring here in Patioland. Aside from the unseasonable cold and wet weather, to which we Californians have been responding with our usual sangfroid*, there is the very real possibility that I made a mistake by reusing the soil from last year's herbs, which may be infested with Herb Funk or something. At least, that's the best explanation I can come up with for why the heirloom tomato seedlings I planted here have not exactly thrived.

But, hey, at least they're not totally dead. So there's that.

Everyone knows that it's better to be rich. It's the money, mostly, plus never having to worry about being any good at your job or what you're going to do if the car doesn't stop making that noise. But it isn't all champagne on the patio and summers in St. Moritz. No, there are hazards to being a rich person, and one is to run the risk of looking very stupid.

You see, rich people go to designers for their clothes, because that's how other rich people can spot them at a distance, and the designers both love and hate them. They love them because the rich are the source of all their money that doesn't come from perfume-licensing deals, and because they let them swan around and act like artists for having produced a pair of pants. But they hate them because designers must spend a significant portion of their working lives living on off-brand ramen and discount vodka, and they have some built-up resentment to work through.

And so sometimes, in the dark of night, they come up with fantastically hideous, stupid clothes that they can sell to those rich people who have never known what it's like to live in a converted closet in an eighth-floor walkup with seven roommates, at least three of whom are sleeping together and/or fighting with each other at any given time, so that, as they count the money from the sale, they think of those wealthy losers walking down the street in their creations and ever-so-softly giggle.

These are some of those clothes.*

When I have a cold, the floor next to my bed looks just like this.


Fifty bucks says the "design process" for this item was the designer strapping a car seat-cover to his chest and high-fiving an assistant.


Just because you don't know how to make a shirt, it doesn't mean you get to sell it as a dress.


My favorite thing about this is how the model is clearly wondering how her life got to this point.


Or you could just carry a purse.

*As a matter of fact, I found so many examples that I couldn't fit them all into one post. So look for more of these over the next few weeks, unless I get lazy and forget.**
**It could happen.
Posted by Daisy Bateman at 3:58 PM 3 comments

Email ThisBlogThis!Share to TwitterShare to FacebookShare to Pinterest
Labels: big pile of no, shopping

I love cheese. I love clothes. I do not think these are things that should go together.

Although, I have to admit that I appreciate the efficiency of having the hostess and the appetizer tray as an all-in-one deal.
Posted by Daisy Bateman at 9:56 AM 1 comments