You Kids Get Back In Here and Play Your Video Games!

Not long ago I posted this link on my Twitter feed, along with the request that all and sundry visit it and vote "yes" in the poll they find there (lower right-hand part of the page, you may have to scroll down). I was going to post a full explanation here, but the fact of the matter is that would require an intricate knowledge of the management of sewage treatment systems and the operation thereof, and you really don't care. So instead I will just point out that "yes" is, in fact, the correct answer, and it is also the answer that is in support of my Mom, who is a very good Mom and can use all the yes votes you can spare.

And, as an added incentive/threat, as soon as we get it to 200, I will post a new installment of The Cute Streets, as soon as I write it.

Also: Bonus! If you visit the site you will be treated to this police blotter item, possibly the most Marinish police blotter item in the history of Marin. Or police blotters.:
A mother on Waterbury Lane called police after she got into an argument with her son during which he broke a crystal candleholder with a tennis racket in anger.
Posted by Daisy Bateman at 11:12 PM 0 comments

The Cute Streets: Tales of a Roomba Kitten

My name is Mipsy, and I'm a kitten. I ride a Roomba.

It was another perfect Tuesday, and I was sitting in the office, shooting the breeze with my partner Nipsy (no relation) when the call came in. It came from the Chief's office, so we went over to see what the shouting was about.

Our Chief, Mr. Flufferwinkles, looked up at us from his ball of string.

"Mipsy, Nipsy, glad you're here. We've had a case just come in." He batted a folder full of papers around on the floor. "Cokes have been exploding and going flat all over the city. We think the Diver Boys may be involved. I want you two to look into it."

"Try under the big tree. There's always something shady going on there. And take the new recruit with you. he needs some time in the field."

"And, kittens, be careful. It's sticky out there."

The new recruit, M'Lady's Duke of Wigglesworth (we called him Fred) was so fresh his eyes had barely opened. While Nipsy tried to get him to stop romping around for long enough to explain the case, I snuck a few laps from the dish of cream I kept under my desk. It was shaping up to be another one of those days.


We headed out to our ride, a silver original-model Roomba with extra brushes, backup batteries and stealth mode. Not the prettiest girl on the lot, but she corners like a dream, and never falls down the stairs.

We started off towards the field, and immediately Fred was a problem.

He didn't understand about riding a Roomba, about how the sides slope down and how it turns whenever it meets an obstacle. Which is why he was bouncing around like a fool, which is why he slipped and fell off, and rolled down into a pile of leaves.

"Oh no we didn't," I said, turning the Roomba around by batting at the sensor. "We're going back."

"Dammit, Nipsy, no kitten left behind! Not this time!"

It seems that the much anticipated (by me, anyway) puppet show version of The Trouble With Death Traps is not to be, at least this year. According to the convention organizer, they didn't have enough time to sufficiently prepare for the awesomeness. My apologies to all of you who already booked your travel for the premier; I'm afraid it was not to be. Perhaps next year?
Posted by Daisy Bateman at 2:21 PM 2 comments

I Can't Tell You Why This Picture Exists 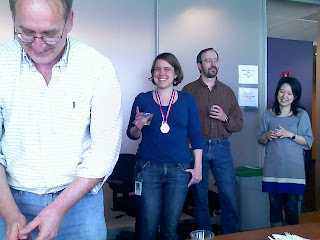 I can tell you that the person on the left is my boss, and I get kind of squinty when I smile*. I may need to work on that.

Also: Really should stop tucking my hair behind my ears.


*On further reflection, I may have been laughing.
Posted by Daisy Bateman at 4:54 PM 2 comments

This Has Probably Been Going Around the Internet Forever

But hey, I always get to these things late.

Question: if you blog something someone posted on Twitter, do you still need to put "RT" in front of it to give credit? Just in case: RT @ColleenLindsay to RT @bsandusky: this post.

Which really just consists of this list, but what I want to know is, how did the name of my own dear departed cat end up on item #9? Is Japan watching me?
Posted by Daisy Bateman at 12:03 PM 0 comments

Email ThisBlogThis!Share to TwitterShare to FacebookShare to Pinterest
Labels: crime, other blogs, shopping

The Lure of Cheese

There is no shortage of cheese in my local environment. There is Draeger's within walking distance of home and Whole Foodses springing up everywhere I look, both with large, if pricey cheeseries. When I go back to the East Bay I can visit either or both locations of the much more reasonable Country Cheese, and C. and I recently discovered a new favorite blue, Humbolt Fog, which is produced a mere 315 miles from here*. So why do I have this urge to order two pounds of unknown Utah cheddar from Wine Woot?

Such is the mysterious draw of the cheese.


*Okay, that's really not that close. But it's still in California.
Posted by Daisy Bateman at 10:53 AM 1 comments

They resupplied the free Cokes at work today, which was good. No complaints there. But they weren't cold, so I put one in the freezer for a while. When I took it out of the freezer and opened it, I found that it had partially frozen, so I left it on my desk while I went into lab. When I got back, I found a pool of Coke on my desk, and what was left in the can largely flat.

Question 2:
Why does this sort of thing always happen to me?
Posted by Daisy Bateman at 10:47 PM 4 comments