Bad to the Subdermal Layer

Happy Halloween! This year, for reasons are now unclear, my lab decided to all dress up as biker-punks for the company Halloween party. With scooters. Here's a picture of some of us: 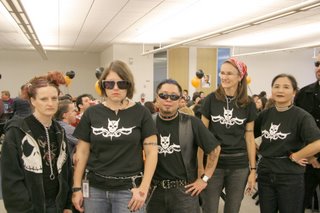 Left to right: Marcia, me, Benny (who designed the shirts-- note the antibody on the skull), Fiona, Hongxia, ~1/3 of Paul 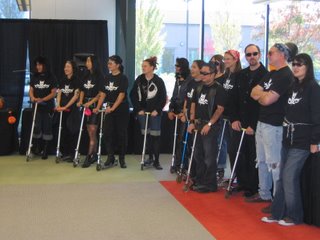 Beginning or ending? I can never remember. Either way, the clock in my car is finally accurate again!
Posted by Daisy Bateman at 1:51 PM 2 comments

Need to Feel Better About Yourself?

Just think, you may have done some pretty nutso, boneheaded things in your time, but at least you never opened a cereal-themed restaurant.

Today is my 29th birthday. I'm starting to think that "not turning out the way you expected" is one of those Things That Life Does.

Convential wisdom holds that when one has a fear, one must face it, thereby conquering it and becoming a more perfect person. So, as part of my ongoing quest for perfection, I decided to sell some blood. At work, because they don't take too much and they pay pretty well (more than a hundred dollars for five 10ml tubes if you have the right genotype).

Those of you who have known me for a while can already see the flaw in this plan. The thing is, I have low blood pressure (corpse hands!) and I freak out very easily. To illustrate, an example from my shameful past:

At my high school, every senior had to get up in assembly and give a speech. The subject matter was open, but was typically something along the lines of Life Experiences. Except that these were all wealthy, coddled children of Marin County, and they hadn't actually had any life experiences, So you got a variety of related topics, such as The Time I Met Poor People and Injuries I Have Had. One of the latter was a young man who decided to describe the time he got hit in the face by a softball, and the amount of bleeding that ensued (I believe the term "buckets" was used). I was sitting on the end of the third bleacher up and I started to feel dizzy. "But no," I thought, "I can't put my head down. That would be too embarassing."
The next thing I remember is looking up at the underside of the bleachers and wondering where my glasses went. I turned my head to find one of my friends holding my feet up in the air and a teacher asking me if I knew my name. I had scored a direct hit on the top of my head, which might have been bad if I hadn't already been unconcious.

What I'm saying is, I have a history. But can a person really be a prisoner of her fears and biology her entire life? (Yes.)

Given that I have taken the time to tell this story, no points for figuring out what happened ten and a half tubes into my ritual bloodletting. The nice lady had to take the needle out pretty quickly because I was twitching. To be fair, I did warn her. Anyway, the experience wasn't a total loss-- I got apple juice and some rice crispy treats and fifty dollars for the shoe fund. And really, don't you think conciousness is way overrated?
Posted by Daisy Bateman at 9:42 PM 0 comments

One of each, actually. That's my entirely stereotypical image of a tropical vacation, and I was determined to make it a reality. Since the sunset in question must, of course, be over the ocean, once we finished our adventure Megan and I made our way to the southern (but west-facing) shore of the island. We found a promising-sounding restaurant in the guidebook which, of course, was under construction (see previous post re: guidebooks, accuracy of). But it turned out okay, because there was another restaurant at the same hotel (a Mariott, I think), outside by the pool, where there was a lady playing music and another performing a very mellow hula. They made a fine mai tai and the rotation of the earth obliged with a glorious sunset over one of the neighboring islands and I had tuna (seared, rare) with a macadamia nut crust and mango salsa that was at least an order of magnitude better than anything else I had had on the trip so far.

Given the chance, I think I could get used to this sort of thing.
Posted by Daisy Bateman at 11:26 PM 0 comments